Cortana, Alexa, Siri, and then some. Digital assistants are invading our lives, and I’m loving every minute of it.

Some people have been working on the problem a lot longer than me, but I thought it’d be fun to share some approaches on the subject. This is part one… There’s a lot of content to cover.

For our first approach, we’re going to break the problem down into 3 layers:

The rest of the code referenced in this post can be found in the Acme::Skynet repository.

Tokenization is the process of breaking down text into sentences, words, or phrases. This will allow us to look at each part of the command or phrase.

Classification is determining what action the phrase wants. If you ask your digital assistant “Remind me in 10 minutes to take the chicken out of the oven” The brain of the digital assistant might classify this as a timer or reminder problem.

For Tokenization, we’re only going to handle a single sentence. We’re stripping most punctuation, and breaking it down into words and pairs of words.

For Classification, we’re going to use an ID3 tree. The input will be a phrase and output the type of problem.

For Extraction, we’re going to use a training set to generate a state diagram. Certain states will be our arguments, where other states determine where we are in the command (more explained later).

For tokenization, we want to break a text into manageable bits. For our problem, we’re only looking at a single sentence. In order for us to handle multiple forms of the same root word, we’ll use a Stemmer. Luckily, in Perl 6, someone has already written an implementation of the Porter stemmer we can use.

In order to handle varying text, we also want to expand contractions before stemming. The code for expanding contractions looks something like:

What we wind up doing is passing each word in the sentence into our decontract subroutine, and then pass each resulting word through the porter stemmer, keeping each word in a list. You can see this in the Acme::Skynet::DumbDown module.

For classification, we’re going to look at generating an ID3 tree. ID3 is a really cool because it’s based off of grouping tasks by entropy.

The central idea is similar to sorting laundry. As you go, you ask yourself ‘Is it light or dark?’, ‘Pants or shirt?’, ‘Normal or Gentle wash?’, then you throw it into the corresponding pile.

When you start with all of your dirty clothes, you might kick them into 2 piles, then separate the bigger piles into smaller ones. This is pretty similar to the ID3 algorithm. Our implementation can be seen at Acme::Skynet::ID3.

Entropy is defined as:

Information Gain is calculated by looking at knowledge we gain by breaking on a feature. Each data item has features or attributes \(A\). In our laundry example, color (light or dark) would be an feature of the data. If attribute \(A\) splits our set \(S\), the calculation looks like:

The whole code can be seen in the information gain and learn methods in ID3.pm6. We look at all of the options, and select the one with the max gain.

We continue this process until all items in our data set \(S\) have the same label, or until we run out of features to split on. If you run down a path of the tree, you should not see the same feature more than once.

For our text, features are the words in our training set. The values for the features are either True word is present, or False word is not present.

When we have a new command, we can go down our tree and see if the command contains the key words. If we stop part way, we select the label with the highest probability. If we make it to a leaf on the tree, we take the label of the leaf.

This guessed label will tell us what we should try to extract from the command.

For basic extraction, we created a graph of our tokenized strings for each class. The graph shows connections between the tokens and arguments. This is a basic method that does a single pass through on the newly observed data. There’s no backtracking. This can cause problems with certain ‘cue’ words appearing multiple times throughout an observation. You can see a full implementation at Acme::Skynet::ChainLabel.

For the graph generation, we used

This code generates a map that represents our graph. For example, if we had 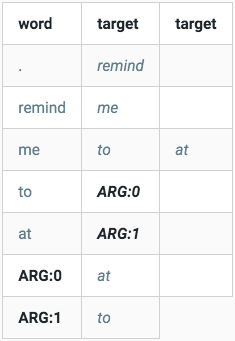 so when we traverse a new sentence, if we see the word “to”, we know that the next word probably goes into ARG:0, and the words stay there until the end of the string, or until we reach a “at”. remind me to eat pizza at lunch, if we follow our table would place eat pizza in ARG:0, and lunch in ARG:1.

Once we reach the end of the string, we dump the contents of our ARG:* nodes.

Determining Intent (or putting it all together)

We called our implementation Skynet.

The classifier is trained on all of the data. We have only 1 classifier.

We need an extractor for every possible action. In our example, 1 for time, 1 for reminders, and 1 for stabbing… The data points for time should not be used to train the reminders extractor.

I hope this peaked your interest in determining intent. This is a very basic implementation, and there’s a lot of research going on in this area. Feel free to comment below or tweet at me for more info.

Next time will look at backtracking or multiple iterations for our Extraction step.